Report on the Workshop on Data in Mathematics, Cernay-la-Ville 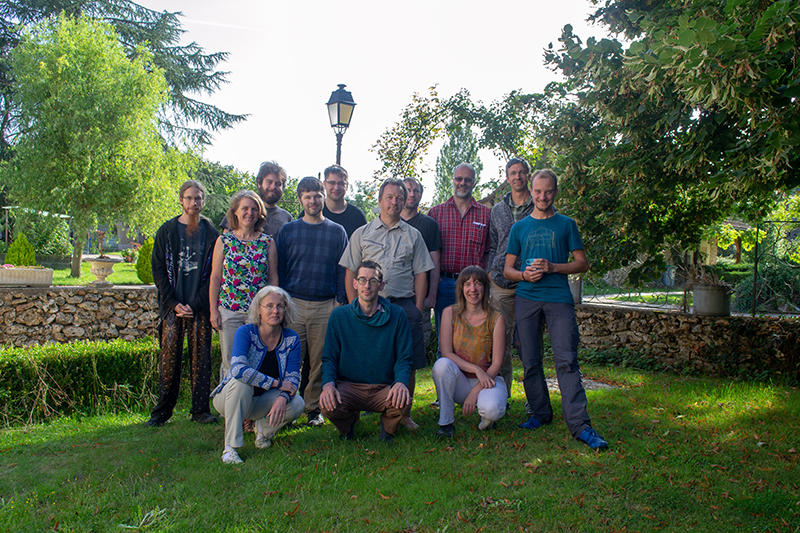 The organisers had to limit participation partly because of the early stages of the project. Because the system is not mature yet, many developers were needed during the workshop to support the dataset authors. This number will decrease quickly as the system matures, and we expect to be able to invite more dataset authors to future installments of the workshop.

AK: We had a super intense workshop with people with very different, complementing competencies all strongly willing to work together towards the same goal of pushing the data on MathHub idea: a real team evolved and with that a push beyond my expectations.

JK: For me this was a great way of getting to know people working towards open math data. It was also an opportunity to see the general idea from different perspectives, including concrete databases, user interfaces, and formal and informal logic interconnecting the data. All this and good concrete steps taken within a superbly leisurely setting – I was absolutely enjoying my time!

GC: By bringing together the developers of the MathHub with the mathematicians who are producing and analyzing math data, the workshop accomplished in a week what would have otherwise taken months. It was immensely gratifying to see how quickly the system evolved into something that is already better than the state of the art for most mathematicians.

Rewrite and mayor improvements of infrastructure

The FAU group had developed a working prototype for an infrastructure for mathematical data in early 2019. In the two weeks leading up to the workshop and during the workshop, Tom Wiesing had completely rewritten the system in Django. The decision to switch backends was made to allow for a more agile development in the future.

During the workshop, the developers made significant improvements in the architecture and the data model. The workshop participants sketched out a submission and editorial process for the platform

Dr. Andrea Kohlhase tested the user experience of the existing web interface through user interviews. She also produced a clickable prototype of an updated interface and used that in a few interviews combined with an eye-tracker test.

Discussions on the user interface showed that the system will need to support from contributors beyond dataset authors and infrastructure developers. The interface

Building ties with the mathematical community

The mathematicians taking part in the workshop were enthusiastic to see the quick results and usefullness of the MathHub Data system, despite the system not being mature yet.

Discussions about a possible journal

The participants discussed the wider problems that members of the mathematical community face when it comes to authoring software and datasets. There is a real need in the community to give some sort of academic recognition to software and dataset authors. It was pointed out that senior researchers should at this point advise young people to not invest time in dataset libraries or software, because they are not going to get credit for it. At the same time, it is precisely the young people who are contributing most to datasets libraries and software.

To provide a basis for giving academic recognition, Michael Kohlhase pointed out that a variety of personal resources will be needed:

The workshop showed that it can be fruitful to bring together researchers who know what kind of datasets their community would benefit from and researchers who know how to generate such datasets. One such collaboration started at the workshop. Finally, but probably most importantly, the workshop showed that the research community accepts the idea of a system like data.mathhub.info and is taking it seriously to the extent that several participants offered help with tasks such as dataset reviews.

The workshop was very successful even with the somewhat limited outside participation (indeed that was probably a factor in the success). As an effect, an outside member of the math data community has bid for a second installment in spring of 2020 in Slovenia and organisation is underway for that.